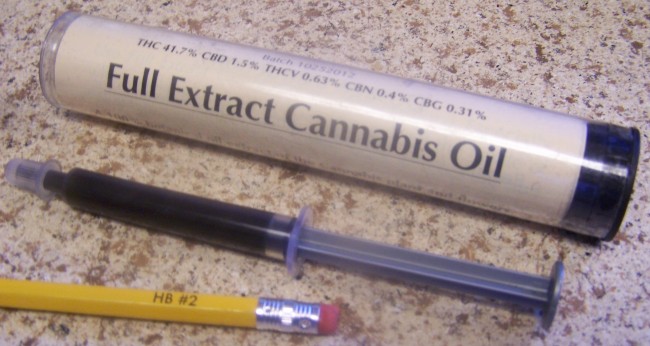 A 54 yr. old British father-of- three, claims cannabis oil helped cure him of cancer. In 2012, Trevor Smith was diagnosed with bladder cancer and was told by doctors that he would be dead within 24 months if surgery to remove nodes on his bladder, prostate, and lymph were not removed immediately. With a concern for the quality of life after having radical surgery such as the removal of organs and surrounding tissues, he came across some information on cannabis oil on the internet while looking for alternative therapies.

Smith claims that after 10 weeks of treatment, the cancer had not metastasized, despite warning from the doctors about delaying the surgery. The doctors now state the the condition has gone into remission, and Smith, who is a manger in the oil industry, has been free of cancer for at least a year now. He says that a debt is owed to the medicinal properties of cannabis oil, and patients should be better informed of alternative therapies that exist.

Some research suggests that the active ingredients found in cannabis, known as cannabinoids, may have an effect in preventing the developing of certain types of tumors. According to studies reported by the National Cancer Institute, some  anti-tumor effects from cannabinoids were observed when the study was conducted with rats and and mice, The various mechanisms for the effect include inhibition of the growth of cells, inducing of cell death, inhibition of the invasion of tumors,and tumor angiogensis, which is the development of new blood vessels that tumors need for continued growth. The research conducted with the National Institutes of Health indicate that cannabinoids appear to destroy only tumor cells without affecting non-cancerous cells, and may even offer some form of protection.

Smith had  experienced excruciating pain, even though his health had improved while adopting a healthy diet and alternatives that included vitamin supplements and Essiac tea. The cancer, however continued to spread , and along with his 55 yr. old wife Carol, the couple resorted to the use of cannabis oil, which they claim has help to cure his cancer, while knowing of the risk of prison sentencing in the UK, for possessing large quantities of an illegal drug.

In the UK, there is no recognition of the use of Cannabis for medicinal purposes, and the Government has rejected calls for any type of legislation. However, clinical trials are being funded in the country by  Cancer Research UK , which is an independent non-profit organisation, focused on combating cancer in the U.K. Doctors are able to prescribe the drug for treating nausea and vomiting, but possession may still carry a penalty of up to five years in prison. The  Derby couple was supplied with the drug from a legal manufacturer in the U.S., and Smith says it was not a question of disregarding the law, but the bigger issue was saving his own life.

The couple, who have been married for 33 years, has written a book that documents the therapy, which includes daily doses of 60 grams of cannabis oil over a ten-week period. They say that neither of them  had any prior experience with any recreational drugs, and the initial reaction was very uncomfortable.

There are continuing efforts to understand and appreciate the mechanism, by which cannabis oil works to cure cancer, as  54 yr, Harold Smith believes, but  researchers believe that the active ingredient, THC and cannabinoids, actually trigger the death of some cells, and the cancerous cells become more sensitive to other therapies, which are now more effective.

Why I changed my mind on weed

Bong Hits for Boomers: Marijuana Smoking on Rise for Seniors